Goofy Games Stag Do in Birmingham 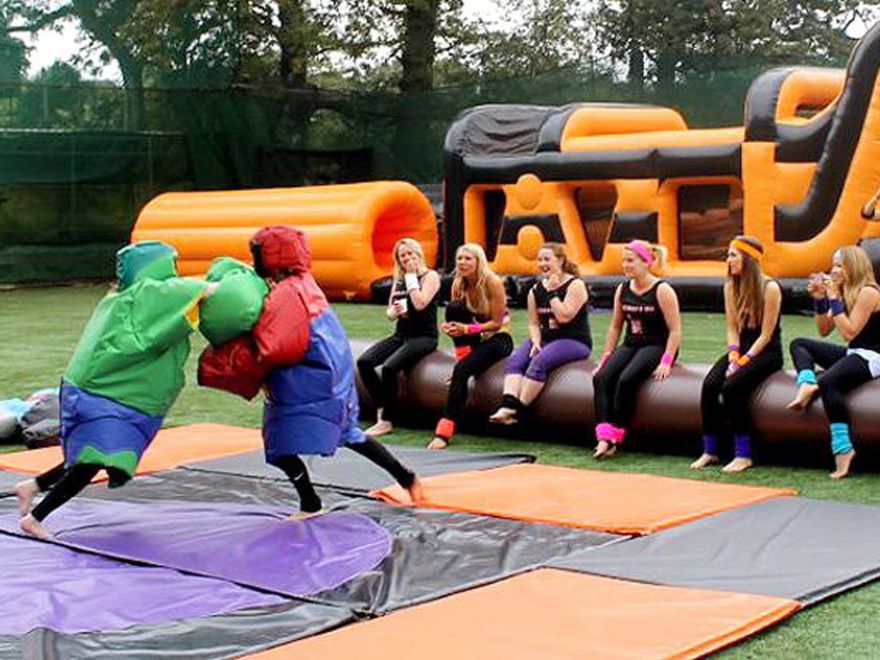 Birmingham is always a great trip when it comes to celebrating a last night of freedom, but why not do something different for your celebrations with the hilarious, goofy games stag do in Birmingham! Enjoy 8 wacky games all in one crazy experience that all the group can get involved in. This hilarious session will definitely bring out a bit of friendly competition between your lads, so make sure to come out on top at the end and claim the prize. With an activity like this, fancy dress is always encouraged so you can go wild and have fun with it.

Test your balance on the Rocca Rolla and even throwback to your school sports day with some hilarious space hopper racing, with all the equipment you’ll need included so you can have a stress free day. Your whole experience will be led by an entertainment host who will guide the event and make sure everyone can try each huge inflatable game, most importantly the fabulous disco dome!

Inflatable Assault Course – As simple as the name, this inflatable assault course is a huge array of different obstacles all in one bouncy inflatable. You and your stag do group will be challenged to tackle the whole course and beat the rest to the end, jumping over, climbing under and avoiding everything in your path!

Rocca Rolla – A hilarious addition to the wacky inflatable games, this Rocca Rolla will need two stags to bravely battle, trying to knock each other off the wibbly wobbly platform to become victorious!

Superhero Wrestling / Boxing – All dressed up in huge, sumo-style superhero costumes, wrestle/box your opponent while all of your stags laugh and cheer you both on!

Pony Racing – Mount your huge inflatable pony and get ready for a totally hilarious space hopper style race that will leave everyone in fits of laughter.

Wobbly Sausage Racing – A team game, your hen group will be split into teams of 6 before hopping on the huge sausage and wobbling it all the way to the finish line!

Space Hopper Race – The perfect throwback for old friends and new, this space hopper race will take you back in time while providing a funny race for the whole group.

Disco Dome – Have a stag do like no other in this neon day-glow inflatable disco dome with colourful lights and a very bouncy floor. This whole game is pretty much an adult equivalent of a children's bouncy castle with some groovy music and lots more falling over!

Footpool – A fun twist on two popular sports, in this game of pool you’ll be kicking rather than hitting, and trying to beat the rest with your footy skills.