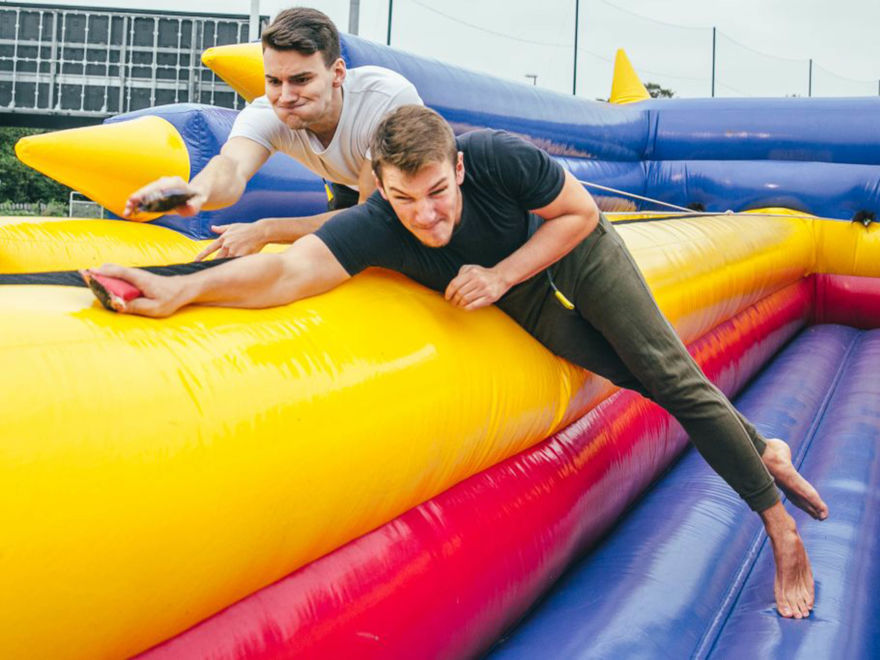 What to Expect on a Goofy Games Stag Do?

On the day, you lads will get dressed up in ridiculous outfits after meeting your event co-ordinator/­s, who’ll then guide you through nine hilariously silly games & challenges. From rolling tractor tyres to playing a classic game of tug-of-war, there will be a prize for the most successful stag at the end of the day! Only for the brave and adventurous, a goofy games stag do is an hilarious way to have a great laugh with all the lads whilst celebrating the big weekend. Full of inflatable fun, you boys are guaranteed to have the experience of a lifetime.

What Games do you Play on a Goofy Games Stag Do?

Tied to a bungee rope, run along the huge inflatable cider course and try to place a plastic cider glass as far along the runway as possible before being flung backwards by the rope!

Battle against fellow stags with inflatable pitchforks and test your balance while trying to wipe them off their podium!

Ready, aim, fire! Using a catapult, launch water bombs towards the "Wurzel dummies" at four different distances away, trying to hit as many as possible!

Competing against each other, your stag group will have to roll 4 different sized tractor tyres as fast as you can to the finish line!

It’s all in the name, two of the stag group will be pinned against each other, aiming to hit your opponent with a handbag while wearing hilarious, inflatable costumes!

Take it in turn to throw a wellington boot into a series of targets, some easy and some a bit more challenging!

Take to the wooden alley and try your hand at this drunk pub skittles, eyeing up the target of wooden skittles while feeling completely dizzy from spinning round the pole!

Was the last game daft enough for you? Well you’re in for a treat when you play mangold dangling. Bar skittles with humans on cider kegs!

This one is, of course, optional. Place your stag in the 'Tractor Seat of Truth' and ask him a selection of questions, wedding themed or not. The end result is up to you... will the groom end the day covered in the dirty ditch water or be saved?

When Can you Host a Goofy Games Stag Do?

Throughout the year, we usually run this event outdoors between Spring and Autumn, skipping the colder months of the year for the open-air fun. After all, these games are best played outside and in the sunshine and makes for a more enjoyable day. However, if you’re dead set on booking in your Goofy Games stag do outside the usual timeframe we can look to host your event indoors. If this is the case, please make sure to let us know when arranging your event with our team.

What to Wear on a Goofy Games Stag Do?

We highly recommend wearing old and/or loose clothing on the day of your event, as this activity involves lots of silly costumes and plenty of physical activity. This includes trainers, as you’ll be on grass for the duration of your event. In a nutshell, only wear clothes that you won’t mind getting a bit dirty!