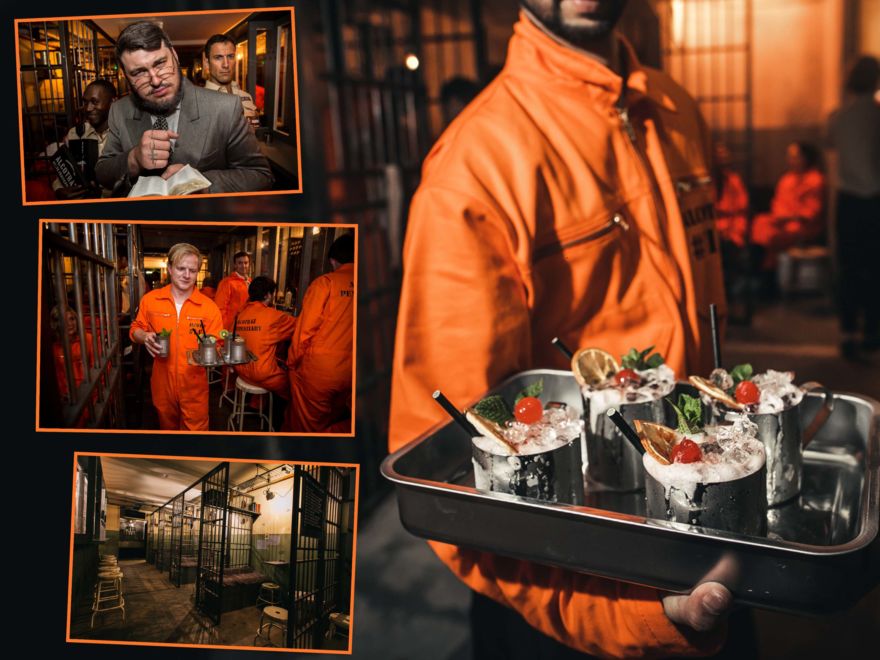 What is the Alcotraz Prison Cocktail Bar Hen Party in Manchester?

A chance to enter a notorious bootlegging gang by smuggling liquor into a prison-like set for the most unique speakeasy experience with the group. You’ve been convicted and need to find a way to smuggle your choice of alcohol passed the overbearing Warden without getting caught. Dress into your orange jumpsuits and use the crooked guards to stash away your contraband before anyone sees. All your liquor will be used to curate a selection of bespoke, off-menu cocktails for the group to enjoy whilst locked up.

What Do We Need for the Manchester Alcotraz Cocktail Bar Experience?

All the props will be provided behind bars except your booze, which is smuggled in by you – if you can get passed the Warden! Simply choose your poison and bring in the liquor between your group. All the glassware, mixers and garnishes are provided when the resident mixologist creates the cocktails to suit your tastes.

What Liquor Shall We Bring for the Alcotraz Prison Event in Manchester?

For the best drink versatility we would recommend your standard 70cl bottle of spirits such as vodka, gin or rum. We suggest bringing along one bottle of 70cl between each 3-4 inmates so there’s plenty to go around.

If you don’t know already, Alcatraz Island became a notorious federal prison during the years 1934 to 1963 whilst it was operating. The prison was known for being uniquely harsh due to the surrounding waters of San Francisco Bay and bad weather. This maximum-security penitentiary housed notorious criminals such as “Scarface” aka Al Capone and Robert ‘Birdman of Alcatraz’ Stroud just to name a few.

Alcatraz Island is also known as The Rock because no inmate ever successfully escaped – but not without trying! One of the most famous escape cases was in 1962 when three inmates broke from their cells and escaped into the water. Frank Morris and brothers John and Clarence Anglin managed disappeared into the water and were presumed drowned after fleeing the island.