Every stag weekend needs some competition and banter between the guys. Stag do games are the answer! They can be used as an icebreaker if the guys don’t all know each other.  Or maybe you just want to make the stag night more fun with drinking games, dares and forfeits. Below is the ultimate collection of the best funny, rude and classy stag do challenges and games to suit all ages and situations. Visit all the famous locations on the Monopoly board whilst downing plenty of pints with the Monopoly pub crawl. What better way to celebrate with the lads? See who has the quickest reactions on your stag do with a fast paced game of thumb master. Pay attention to thumbs or prepare to drink a lot of alcohol! Its recent custom on stag do to dare the stag or each other to do some hilarious or should I say, stupid things! Well this list contains our most outrageous and hilarious Stag Do Dares you can find! Pick out your best gear and prepare to hit the pubs and bars with a sporty twist as you and the lads compete for glory with the pub golf drinking game!

Make sure you and the lads kick off your big night out with plenty of banter and boozy antics by starting the evening with the Ring of Fire drinking game! Check out these stag party pranks to humiliate the stag on the weekend. Great for some good stories for the best man speech & memories from the stag party!

Games to Play on the Stag Night

Add some fun extras into your stag weekend with one or two of these impressive stag party games. There are so many hilarious and unique ones to try out. Stag Do Challenges, Dares and Forfeits

What stag do would be complete without some dares, forfeits and challenges on the night out?

The Best Stag Do Games & Challenges

Nowadays, there’s a set of stag party games to suit every single groom to be. From classic and funny stag do games to naughty, cheeky, intel­lec­tual, and unique. When you’ve got a solid foundation of stag do activities and some accom­moda­tion ready, fill the gaps in the celebrations with a barrel of laughs! Grab some different and original stag games to get all the guys in the party spirit. No matter what kind of stag night games you’re hoping for, there’s something for everyone in our full range of hilarious games.

This game involves conveniently placed thumbs and keeping your eyes peeled. One of the lads will be nominated the ‘­thumbmaster’ and whenever he puts his thumb on the edge of the table you have to do the same. The last to do so has to down their drink and becomes the new ‘­thumbmaster’

Get kitted up in your finest golfing gear and decide on if you’re doing a 9 or 18 watering hole pub crawls. Once you’ve got that give each pub a par of 3,4 or 5 (gulps) and that’s how many gulps it should take to down your drink. Mark your scores at each pub.

A game that involves playing cards and alcohol. Set up a circle with the cards face down and an empty glass in the middle. Everyone needs a good amount of alcohol as each person picks up a card. Each card has a different meaning that can result in some sort of drinking.

Get the group together and decide on a dictator. When the dictator says ‘DEAD ANT’ all the group will need to fall on the floor, stick their arms and legs up in the air and scramble like ants. The rule is that everyone has to do it no matter where you are. Trust us when we say you’ll be in hysterics.

Put together a list of words that are banned for the duration of the stag do. Whoever says these words has to do a forfeit. These words could be the bride’s name, pint, loo, beer, shot. You get the idea. Try and trick some of the lads to end up saying some of these words too!

As you’re enjoying your stag night out you will have one nominated shark spotter. As soon as you hear the two words…SHARK ATTACK! You have to be quick as you try and scramble up onto anything above the ground. It could be the bar, a table, anything!

A simple way to get everyone to down their drinks. Wherever you are and whenever you have a drink in your hands on the stag do. Make sure everyone understands the game and as soon as someone says ‘whoosh!’ as loud as they can everyone else has to and then down your drink.

A great way to get everyone drunk and to find out things you didn’t know about one another. Say a statement that you haven’t done before and whoever in the group has done it has to drink. If the groom has done it then he has to open up with more detail about the statement.

A game that can be used all night long. Whenever your group fancy a drink of their beer they will have to use their opposite hand. You can call anyone out who doesn’t do this and they will be given a forfeit. But if you call out incorrectly then you must do the forfeit.

Stag Do Dares vs Traditional Games

A long-debated topic of celebrating a last night of freedom is ‘how far is too far?’ Depending on your groom to be, you might want to add a few stag party dares into the mix to liven things up! Alter­natively, games are a safe and fun way to break the ice as well. But what are the pros and cons of each – and the top dares and games to try on the stag weekend? 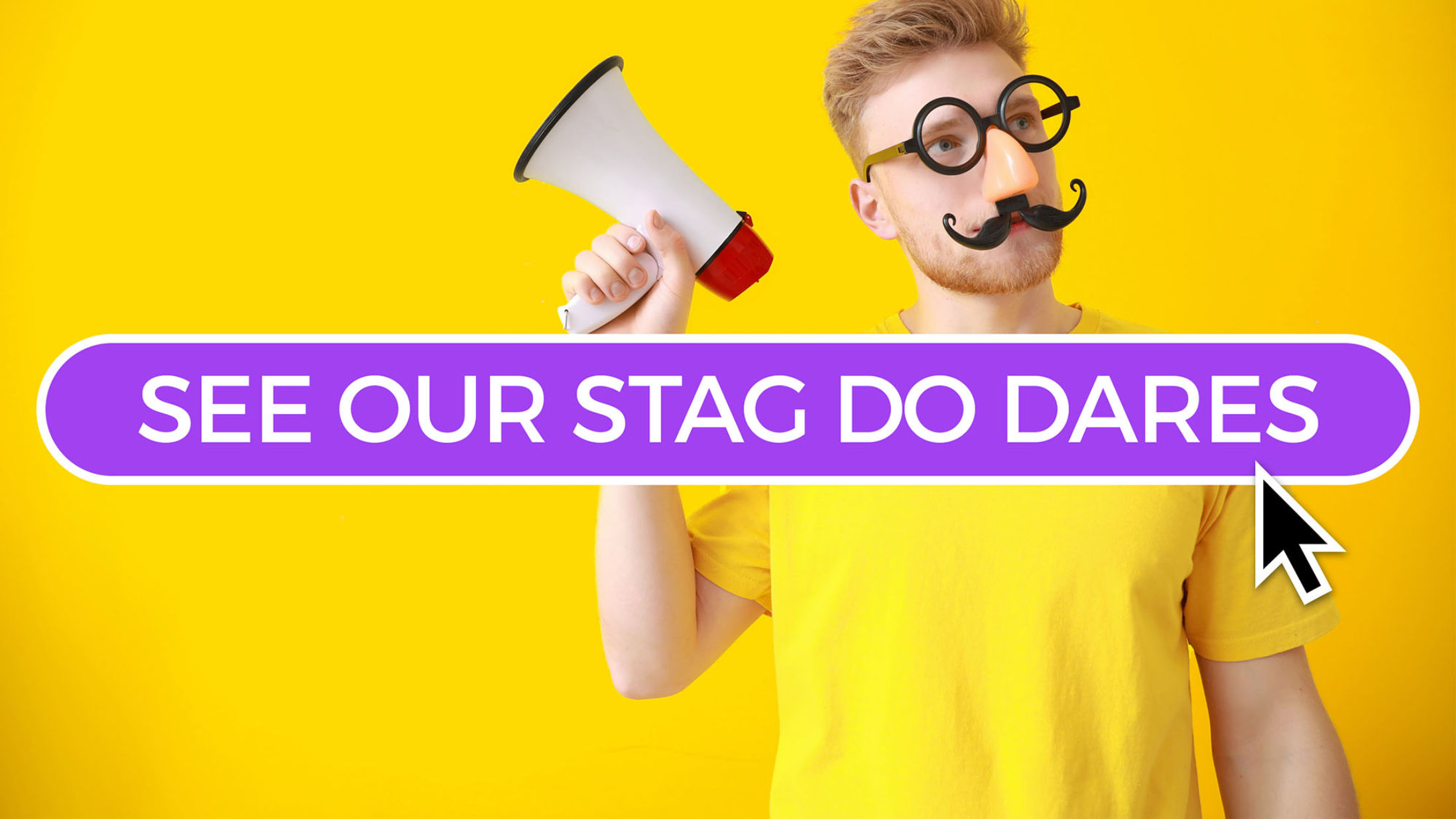 For decades, a last night of freedom has been littered with stag party games that get the lads on the floor laughing. A great icebreaker for a group that are unfamiliar, it’s a great idea to kick off the celebrations with a few games. Throw in classic drinking games or opt for stag do games non drinking – the choice is yours! Stag night games range from a classic bar coaster flip challenge to structured naughty bingo and everything in between. 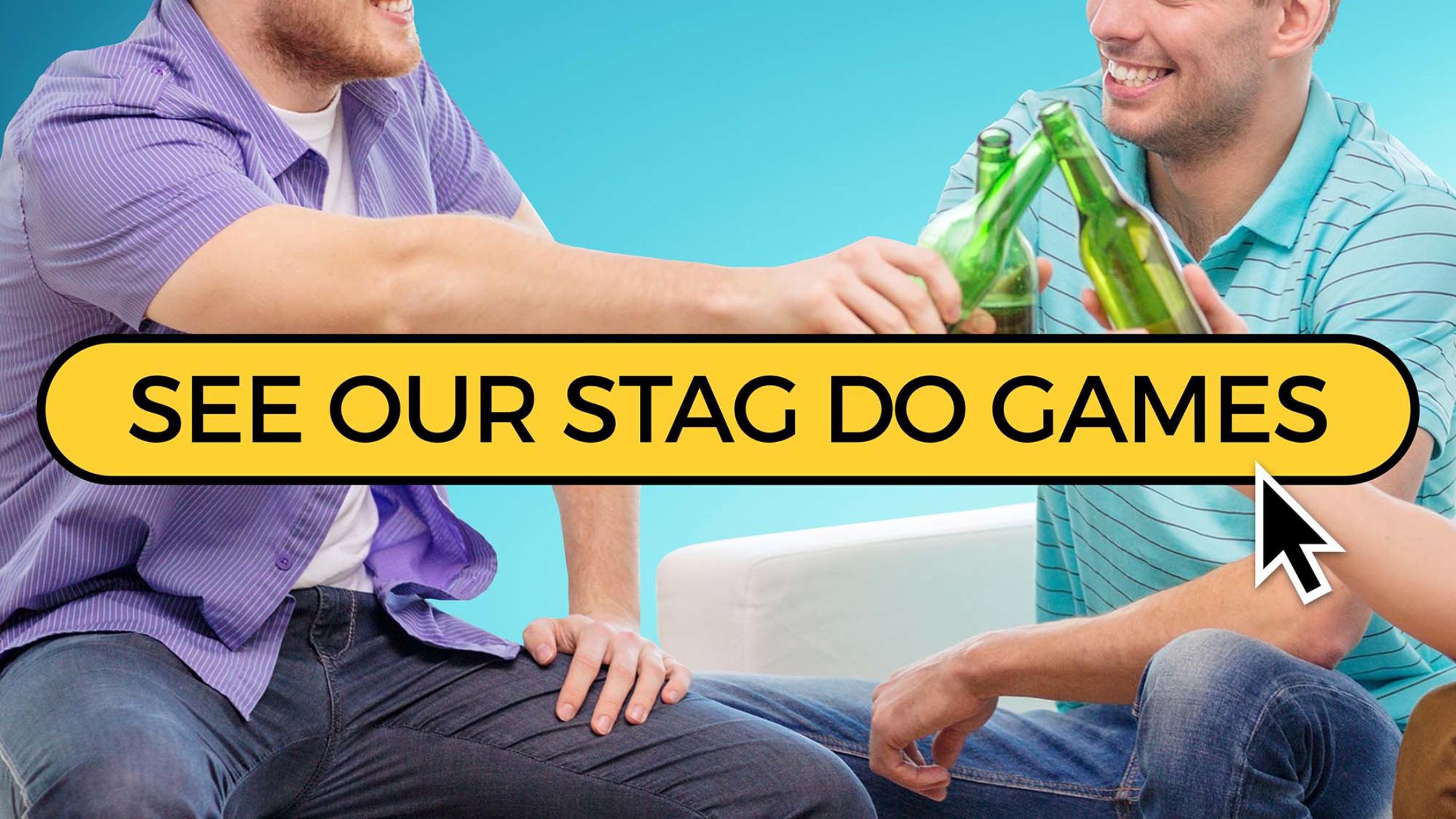 Our job is to make your job as the best man easier, right? You’ve got so much on your plate already, collecting, inventing or writing down all the stag party game research you do is definitely not top of the agenda. We’ve got you covered. Whether you’ve got organised early or the stag weekend is just around the corner, you can have access to our printable stag do games whenever you please. Download them, print them and play them to keep the party spirits high throughout the last night of freedom.