Mersey Games for Groups in Liverpool 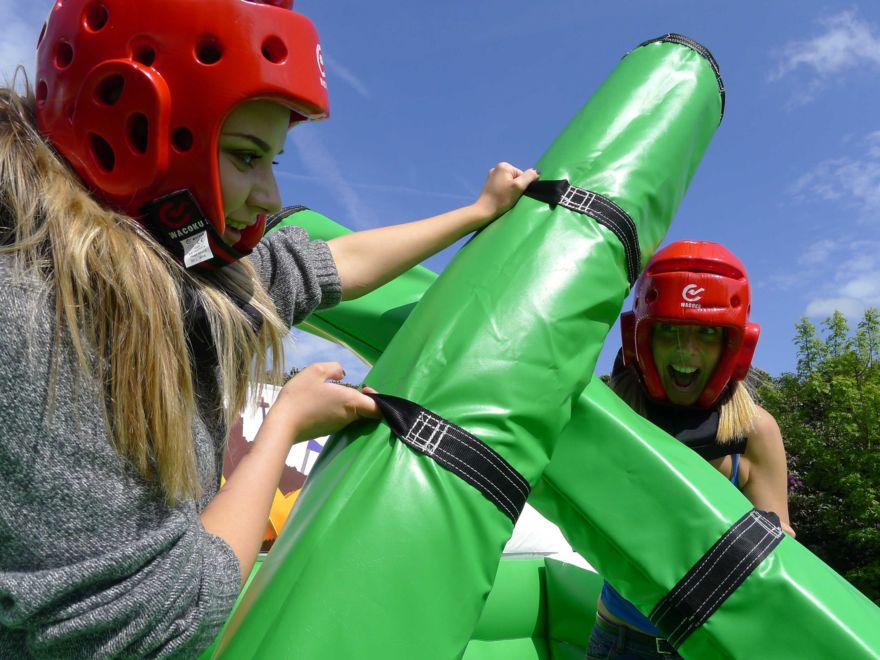 No matter what occasion you’re planning, you can’t go wrong with the Mersey games for groups in Liverpool. This wacky and ridiculous experience is built for groups who just want to have a laugh, and you can do it all right outside the centre of lovely Liverpool. No matter what age, how big your group or what you want the event for, the Mersey games are sure to bring a unique and memorable theme to your occasion. Spend a few hours bouncing on inflatables, jumping into challenges and bumping your team up the leader board to come out on top at the end of the series!

The Mersey games for groups in Liverpool takes a bunch of different scouse stereotypes and plays on them in a big way. To give you an idea of what you and your group will be up to, the games include a mini version of the grand national with hilarious horse hoppers, and your very own penny lane bowling to test your aim.

The Grand National – Let’s be honest, would it even be a trip to Liverpool without Aintree and the Grand National? To help you satisfy all your horse racing needs, we’ve created a silly horse race for everyone to enjoy. Hop onto your very own inflatable and ride the hilarious horsey hoppers down our custom-made racetrack! Place your bets ladies!

Mathew Street Challenge – Liverpool is largely famed for their Mathew Street festival, with the pubs full all day and people listening to bands and getting merry. So, we offer you a Bungee Run with a scouse twist. Tryto place your cider glass on the furthest tray possible down the inflatable Mathew Street before you go flying backwards on the bungee rope!

Shoe Slinging - Playing on the stereotype of high heels and well-dressed scouse ladies, try your best to fling trainers at the targets to get as many points as possible. Take aim at 3 tyres, each being worth more points as they get more difficult to hit. Reebok Classic!

Penny Lane Bowling – Sweet & simple, aim your balls at the pins down Penny Lane and try to hit as many as you can… oh and you might be a little dizzy from everyone spinning you beforehand!

The Scouse Duel – Grab a custom made pugil stick (based on the St John’s Tower, of course), hope onto the beam and try your best to knock off your friends for the victory!

The Derby – We all know biggest rivalry in football happens twice a year on Merseyside as Liverpool’s Reds take on Everton’s Blues. So, we’ve set up a mock clash of these titans in the form of a hilarious sumo-wrestling match. You get to pick your team and try to take down your rival in a best of three.

You’ll Never Walk Alone – As well as being a famous football for Liverpool FC, it’s also the name of our three-legged race. Split into teams, tie your legs to your friends and away you go. You’ll all race against each other around our special course. Hilarious!

Ferry across the Mersey - A cheeky scouse take on the classic Tug o’ War! With the Mersey ferry in the middle of the fight, it’s a team effort to pull the ferry and your opponents across the line.

The Mersey Shower - One person (or victim) will end the games by sitting under a bucket of icy water whilst being challenged to questions picked by the rest of the group…. answer them wrong and you know what’s coming!