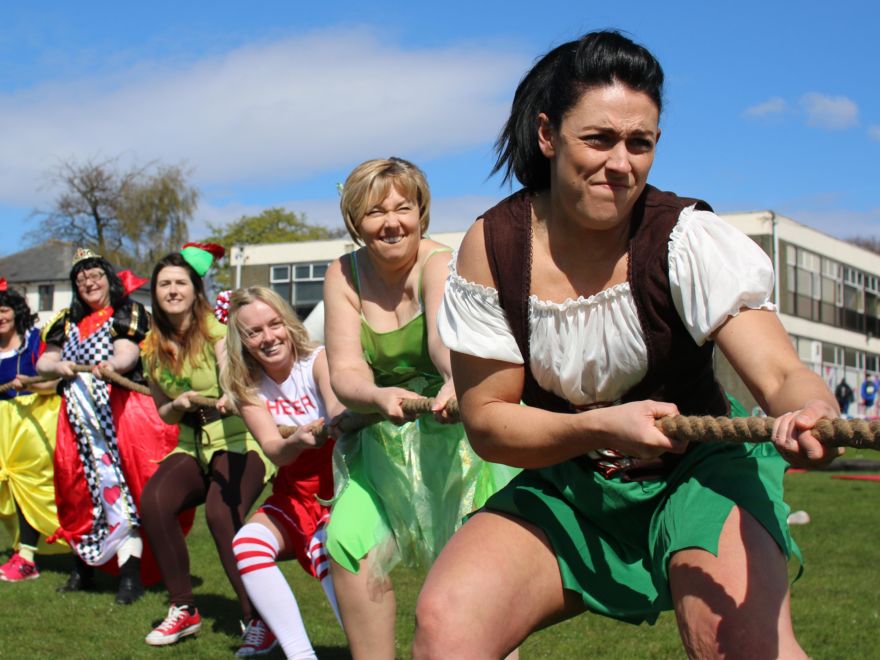 What Does the Goofy Games Hen Party in Liverpool Include?

When you go for a goofy games hen party in Liverpool, you and the girls will have an action-packed afternoon of competition with a variety of hilarious scouse-themed minigames. With plenty of inflatables and light-hearted fun throughout the afternoon, this is the perfect way to get a bit of fresh air away from the boozy antics! All of you will be rolling around on the floor with laughter after this insane experience. Whether it’s trotting your way to victory in The Grand National or attempting a three-legged race with You’ll Never Walk Alone, there’s fun for everyone to enjoy with this activity!

It wouldn’t be a trip to Liverpool without Aintree and the Grand National, so we’ve created this hilarious horse race for everyone to enjoy. Ride your very own inflatable and hilarious horsey hoppers down our custom-made racetrack! Place your bets!

Playing on the stereotype, try your best to toss those trainers at the targets to get points. You’ve 3 tyres to aim for that are worth more points as they get more difficult to hit. Reebok Classic!

This one is simple, just aim at the pins down Penny Lane and try to hit as many as you can… oh and you might be a little dizzy from the hens spinning you beforehand!

With custom made pugil sticks based on the St John’s Tower, gladiator you’re your friends and try your best to knock each other off!

The biggest rivalry in football happens twice a year on Merseyside as Liverpool’s Reds take on Everton’s Blues. We’ve set up a mock clash of these titans in the form of a hilarious sumo-wrestling match. You get to pick your team and try to take down your rival in a best of three.

You’ve probably heard of Liverpool’s famous Mathew Street festival, with the pubs full all day and people listening to bands and having a skinfull. This challenge is a Bungee Run with a scouse twist, trying to place your cider glass on the furthest tray possible down the inflatable Mathew Street before being flung backwards by the bungee rope!

This may be the famous song of Liverpool FC but it’s also the name of our three-legged race. Split into two teams, tie your legs to your teammate and away you go. You’ll all race against each other around our special course. Hilarious!

8. Ferry across the Mersey

A Scouse take on the classic Tug o’ War! With the Mersey ferry in the middle of the fight, it’s a team effort to pull the ferry and your opponents across the line.

The hen will end the games by sitting under a bucket of icy water whilst being challenged to questions picked by the rest of the group…. answer them wrong and you know what’s coming!

How Does the Crazy Games Hen Party in Liverpool Work?

All of these Liverpool hen party goofy games have a scouse touch, including The Grand National game, The Mersey Shower and even a scouse duel with mini versions of the Radio City tower to help declare a winner for the day – so bring you’re A game! With everything you need including an entertaining host to guide your day, all you need to do is find the best fancy dress possible and make this Liverpool Goofy games hen party activity one to remember.

A point scoring system will be used for each game. Scores will be added together, with the winning player given a prize at the end of the games.

Rating 5.0
Arlin Mathew
20th October 2018
The event was amazing everyone enjoyed themselves very much, the staff were fantastic!! Thank you for all your help in organising the event!!