So you’ve got the stag trip booked, the lads are ready, all you need to do now is add some finishing touches.

Jump to the information quickly here

We’ve been in the loop for stag do antics for a long enough time to know that forfeits are the most important part of making the weekend memorable as well as stag do games. There are so many ways all the lads can get involved. Whether they’re the one having to do the forfeit or dishing it out. It’s the perfect way to have a laugh with the lads in a fun and epic way.

Get yourselves a mascot, it has to be something stolen from the groom to be's house. And get pictures with it throughout the trip. In front of the city’s key landmarks, in the pub and anything else you can think of. Try to not let the stag see what you’re doing until after the party, then he can see what it’s been up to! This is a something the rest of the boys can get involved in.

Get the stag to stand in the city centre wearing some fancy dress that you’ve picked for him (a penis costume, chicken costume, a dress) with a sigh that reads “I will complete anything for just £1.” He must sell it though, no standing there hoping he won’t be asked. And then it’s your job to make sure he completes the dare.

If you are in the city centre this should be easy, find a busker. Then make the stag join in with the said busker. After he has finished singing along to the songs he must suggest a 50:50 split on the busker’s earnings. (of course don’t be too pushy with this, make sure he knows it’s a joke, the last thing you want is any trouble)

4. The Banana, The Gorillas & The Zoo Keeper

Dress the stag in a banana suit, the rest in gorilla suits apart from one who will be dressed as a zoo keeper. The zoo keeper will act as the referee and has the power to start the game whenever and wherever. So when the game starts, the stag (banana) must start running, then after a few seconds the others (gorillas) will chase after him.

the groom to be must find a condom, a bra, a local souvenir, urinal soap, a bottle of sauce and get a selfie with the hen. But the real challenge is that he can’t spend any money getting these items! 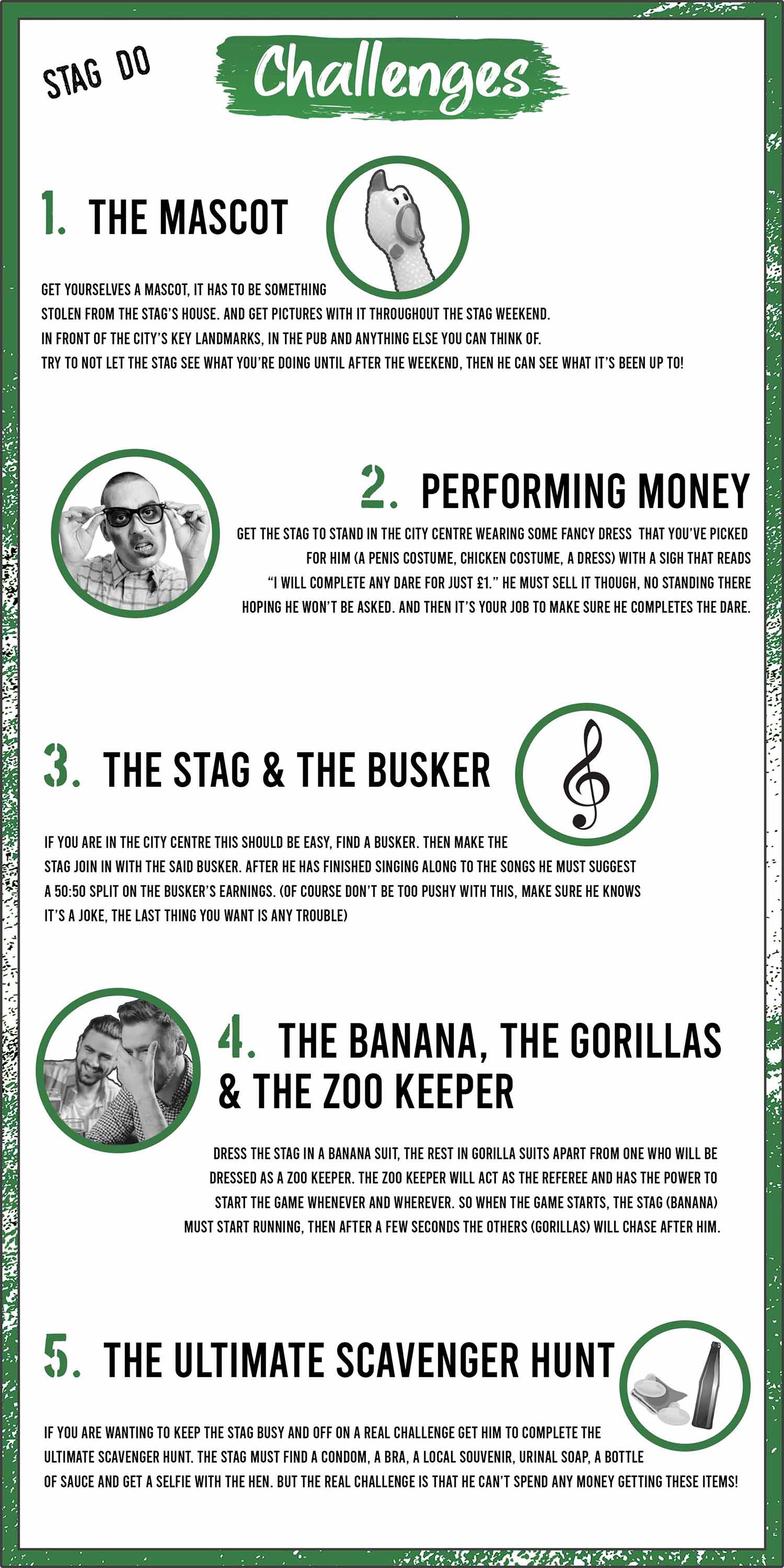 What Dares To Do?

Its tricky to decide with dares to do on the night.  Should you do naughty, funny, rude or totally outrageous. Heres a list of 5 that we like;

Check out the top 20 stag do dares here.

You will just need 2 things for this forfeit, a sock and a drink. If this is chosen, the victim must take off their sock and place it over the drink your drinking and down it!

When has gaffa tape ever not been useful? Use it as a forfeit and tape him to a tree or a lamppost, tape his eyebrows maybe?

Make your way over to the gents’ toilets and offer a helping hand to anyone with their business. Someone will need to accompany them so that you can be sure the forfeit has been completed.

Eat one raw chilli or a shot of chilli sauce. The choice is yours.

The victim must crawl around on his hands and knees pretending to be the group’s pet dog for 5-10 minutes. He mustn’t talk, only bark.

The shoes of the victim must be tied together for 30 mins.

The victim must convince any girl at the bar to give him a lock of her hair, he can’t return without it.

For the next 15 mins, the victim must sing everything he wants to say Pavarotti style. This will be incredible if it’s his turn to get the round in!

For the ultimate punishment create a sign to place on the victim that reads: “Have a forfeit for me? Text or call: number”

We have over 100 different amazing stag do activities across 65 stag locations for you to choose from.  Our event managers are always on hand to discuss ideas, just call now.